It arrives from Sardinia and it is called ARIA project, the scientific laboratory for the distillation of Argon-40, a chemical element fundamental in the research of dark matter.

The project is realized thank to the collaboration between INFN, National Institute of Nuclear Physics and Regione Sardegna.
The ARIA collaboration is constituted by the INFN together with Carbosulcis, a subsidiary of the Sardinia Region that manages the mining plant, the Princeton University, the Autonomous Region of Sardinia, the University of Cagliari, the University of Sassari, the Politecnico di Milano, the Fermi National Laboratory, ENEA, the ITIM (Cluj Napoca – Romania) e many others institutes and universities taking part of the DarkSide-20k collaboration.

The infrastructure is unique and it has been inaugurated on September 21 2018, in Sardinia, in the Monte Sinni mine, in Sulcis-Iglesiente. 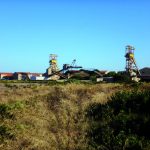 A view on the Seruci mine, Carbonia, Sardinia. 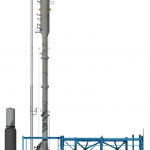 The prototype of the cryogenic column to obtain Argon-40 in the ARIA Project.

The goal of the project is the building of a cryogenic distillation column for the separation of the air in its fundamental components, elements that find their usefulness in different areas of research and application. In particular, one of these components, Argon-40, will allow the development of an innovative technique for the research of dark matter at the National Laboratory of Gran Sasso (LNGS) of INFN, designed and realized by the scientific collaboration of DarkSide-20k experiment.

Almost a century of astronomic observations have shown that ordinary and visible matter accounts just for the 5% of entire universe. The majority part of it, it is made by some dark forms of matter and energy, the so-called “dark matter” and “dark energy“, respectively.  In particular, the latter is responsible for the accelerated expansion of the universe.

Dark matter represents the 25% of our universe and is responsible for most of the gravitational dynamics of stars in galaxies and of galaxies in clusters of galaxies. We can only infer its existence indirectly from its gravitational effects on ordinary matter.
Dark matter does not emit light (this explain why it is called “dark”), so it is invisible to telescopes and this makes its direct detection rather complicated.

However, there are a lot of experiments built for the direct detection of dark matter. All of them are based on the detection of the scattering of light dark matter particles on target-nuclei inside a detector.

The ARIA project plays a fundamental role in this game: it will product a big amount of very pure Argon-40 will be used as a target for one of the most important experiments in the field, the DarkSide-20k experiment.

The infrastructure for the production of the Argon-40 and other chemical elements will consist of a 350-meter cryogenic distillation tower, which will be installed in the Well 1 of the Seruci area.

The tower will consist of 30 modules tested at CERN, and then transported to the Nuraxi Figus shipyards. Here, the modules are partially assembled on the surface for the first preparatory tests for the installation of the entire column inside the Well 1, where the adjustment activities are already taking place since last year.
The height and diameter of the wells, their configuration, with multiple accesses and integrated security systems and, above all, the availability of a truckable motorway from the surface to a depth of 500 meters, are ideal conditions for safe installation of a plant with unique features in the world.

Thanks to its state-of-the-art infrastructures, built almost entirely within a pre-existing mining well, ARIA will be able to significantly lower the energy costs of production, making the precious elements obtained by the distillation of air more accessible and usable.

Air distillation, yes we can!

Cryogenic distillation is the most efficient technique to produce stable isotopes. In particular, the distillation of the air allows to produce Argon-40, one of the many Argon isotopes in nature, fundamental for the detection of dark matter at Gran Sasso underground laboratories.

Argon is a gas and it accounts for about the 1% of the total volume of the atmosphere in the Earth. The scattering of cosmic rays on atoms of atmospheric Argon produces many isotopes of this element (isotopes are atoms of the same element which differ one from the other only for the number of neutrons in their nucleus), each of them distributed in a different concentration according to conditions at which the process take place.
In particular, this phenomenon produces, among the others, Argon-40 and Argon-39 isotopes.
The former is a stable atom, whereas the latter decades through radioactive (beta-)decays, with a life-time of the order of hundreds of years.
Even if our atmosphere (and the air we breath too) contains only traces of Argon-39 isotopes.

The natural radioactivity of Argon-39 does not constitute any danger for our health, but it represents a terrible noise for the dark matter experiments.
Indeed, the DarkSide experiment searches for rare scattering events between light dark matter particles and Argon-40 nuclei. The latter is useful as a target in this experiment for its stability (it does not decay) but it must be pure, i.e. without any contamination from instables atoms (as Argon-39) that can produce noise and inficiate the results of the experiment.

Therefore, the goal of ARIA project is to product tons of stable purified liquid Argon-40 by using the cryogenic distillation column in Seruci mines.

We can even do more and better!
In order to do so, one can try to distillate the air or, alternatively, to extract Argon from the mantle of the Earth and distillate the latter. Indeed, many experiments held in Colorado mines, USA, have shown that the concentration of impurities in Argon extracted from the mantle of the Earth is lower (of a factor of about 1000) than the atmospheric one, including the radioactive Argon-39. For this reason, the cryogenic distillation column located at Seruci mine will directly purify Argon-40 coming from Colorado mines.

Gran Sasso Laboratories are world leaders in the direct search of dark matter: indeed, various experiments are carried out, based on different technologies, all of which have the objective of detecting the scattering of dark matter particles on target-nuclei in the detector.
In particular, the DarkSide detector is based on the use of Argon as a means for the interaction: it consists of a biphasic, liquid Argon and gaseous time projection chamber (TPC).

The results of a prototype detector in operation at the Laboratories since 2013 have already reached the best sensitivity in the world for the research of low mass dark matter particles.
The next detector, DarkSide-20k, was designed to implement the most ambitious research and discovery program for dark matter. It will enter operation in 2022, and will require the use of 50 tons of Argon processed by the ARIA distillation column. Therefore, the ARIA project plays a fundamental role in the strategy of possible discovery of dark matter through Argon detectors. The uniqueness and perspectives of the project have allowed to bring together scientists from the four corners of the globe to form a unique international collaboration that gathers all researchers who have so far developed Argon detectors for dark matter: it is the Global Argon Dark Matter Collaboration, whose first step is the DarkSide program at the Gran Sasso National Laboratories.

DarkSide-20k is an experiment approved and funded by the National Institute of Nuclear Physics and the US National Science Foundation. Further important contributions will be provided by ten other countries (Brazil, Canada, China, France, Germany, Great Britain, Mexico, Poland, Spain, Switzerland, Russia).

The Interdisciplinary Applications of the Aria Project

As often happens in physics, the experiments realized to solve many puzzles in the understanding of phenomena in nature lead to various technological applications in different fields of research, some of them having a direct consequences on our day-lives.

For example, the distillation tower, in addition to producing the stable Argon-40 isotope of interest for dark matter research programs, will also serve to carry out pilot studies for the production of stables 76Ge, 82Se, and 136Xe isotopes, of interest for research programs on neutrino always carried out at the Gran Sasso INFN Laboratories.
Furthermore, ARIA will allow the experimentation and development of the new technology for the subsequent large-scale production of stable isotopes of commercial interest, such as 13C, 15N, e 18O, which are used for example in medicine and have a major international market.

Carbon mines and the production of “spirulina”

Spirulina is the name of a dried biomass obtained from the so-called “spirulina seaweed” (Arthrospira platensis).
Recently, spirulina has been used as dietary supplement and food additive. Moreover, it can be also used as a complementary ingredient for feed for aquaculture.

Spirulina is commercially grown in large open water channels. However these cultures are subject to daily fluctuations in water temperature, which depend on the geographical location, season and management strategy. Constant temperature, high alkaline conditions and high light irradiation are the main environmental factors that influence the productivity and composition of biomass.
For these reasons, a wide variety of photobioreactors that uses geothermal water pumped from coal mines to heat a spirulina culture at the optimal value has been designed and built.
One of the main advantages of this system is to obtain a better culture temperature profile during the day and the entire year. This, in turns, will allow an increase of the period of production of spirulina.